To all my friends in the USA and to all that celebrate HAPPY THANKSGIVING. I hope you all have a great day.
Posted by Marlene at 06:03 2 comments:

Progress and A Win.

It's amazing what a day off work and a 5-6 degree drop in the weather temperature does for a productive sewing day. I have managed to sew the next two blocks for my pink quilt-the little bunny gave me trouble but I finally got him done even though he looks like he's had a few 'magic mushrooms'!!
The original pattern has the buttonhole stitch done in black and that s how I did the purple one I made but this time I have decided to blend the thread colour with the fabric and I'm liking it this way. 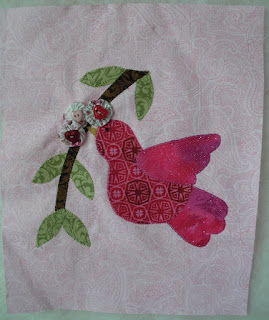 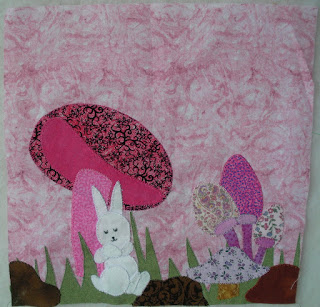 Then once these were finished I managed to join with the two bunnies and rows one and two are together-only four to go now. I think my great niece is going to enjoy this. 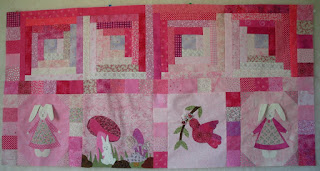 Last night I got an email from Christine over at Once Upon a Quilt to say I had won her giveaway. I had actually forgotten about it as it was a couple of weeks ago that she ran it.

I can tell you all I was sooo..... excited. I have won two of her patterns which she has already posted to me so I'll be watching for that postie. THANK YOU so much Christine.

I only enter giveaways on blogs that I follow and I have now won three times in the short time I have been blogging so I consider myself very lucky. You are all a great group of people.

Some weeks my roster at work is such that I get little time to be in my sewing room and this past week has been one of those.Then when I have today off it is so hot that it's a bit uncomfortable to be sewing. They say it has been 28degrees but the neighbours thermometer says 36 and that is what it feels like. The poor cat is lying under two fans panting-no air conditioning in this house-YET!
I have been attempting my Sue Ross BOM which has alot of set in seams and I think I have done more unpicking than anything else!!
One thing I have achieved is another bunny block which is cute 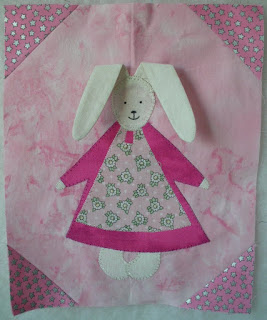 I have been keeping the postie busy this week.

First came my box from my Advent Swapper Sigrid who lives in Germany so that was very exciting. I knew she had posted it but you never know whether things are gong to arrive or not. 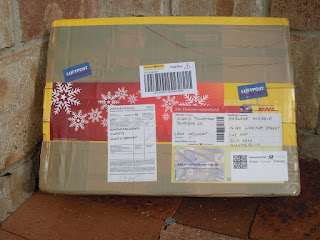 So when I saw this on my doorstep I was pretty excited. I have resisted the temptation to open the box and hopefully can wait until the 1st Dec.

I then received my parcel in the Quick Christmas swap where I was partnered with Sandi. there was no stitching involved in this swap organised by Jenny.Thank you Jenny. There was no stitching involved in this swap,you just had to send two Christmas fat quarters, a metre of ribbon and two buttons or decoration. This is what I received from Sandi-the fat quarters are just so divine.And look at those lovely Christmas baubles.It is great when you enter these swaps to be partnered with someone new and be able to make new blogging friends. 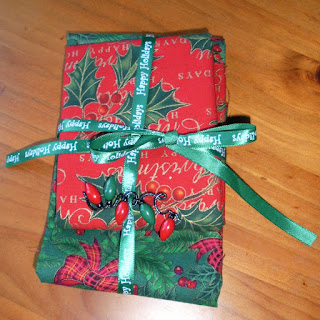 I am however still waiting for my parcel from my Stitchers Angel Swap. My partner emailed at the end of October to say she had posted it but I think it is going round and round the world.!

I also got another big box delivered that I was excited to see as I did have grave doubts if I would see it again and that is the Queen size quilt that I bought when I was in Vietnam. They had said it would take at least three months to arrive so I wasn't expecting it until about Xmas time so am delighted it is here safe and sound. 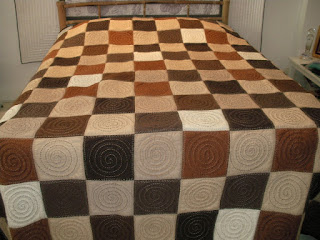 If were not  reading my blog in September then that is where the entry is regarding this quilt and where you can find the story of the group of women who make them if you are interested.
Then the other exciting news this week was I won a giveaway, and was totally unaware it was happening. I enjoy visitng Rene over at her blog-she has a great blog that includes not only her quilting ventures but she also loves photgraphy so has some stunning shots there as well. If you haven't visited pop on over.
It was her 50th post and I left a comment, then the next day she said she had prevously decided to have a giveaway for all that had left a comment, but hadn't announced it. Great way for I giveaway I think. Don't know what it is yet but she will post it after Thanksgiving.
Well that was my week. Hopefully I can get some stitching done tomorrow and post my achievements.
For those of you experiencing high temperatures I hope it cools down soon, and for those of you wxperiencing the cold keep warm and I hope winter isn't too bad.

Where are the weeks going? I have been on Night Duty again this week so the poor body clock doesn't know where it is. I haven't achieved alot in the sewing room as the Australian Golf Masters is on so I have been glued to the TV. Unfortunately I will miss the last round today as it is off to work soon Hopefully it will be quiet enough to catch a bit of the action.
I have decided on my colour scheme for Joseph's Coat -I am going to use a black background and Kiwi prints that I think will turn out ok. This is placed but not sewn as yet. 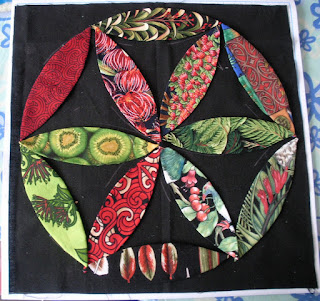 The other thing I have achieved is that I have made the top row of log cabin blocks,and one of the bunny blocks for the pink quilt shown in the previous post-looking cute. 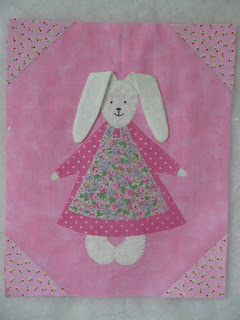 Then the mail man delivered Block 4 of the Sue Ross BOM. This one is called Arrowheads and has alot of set in seams so may be a bit of a challenge. The fabrics look good this month so that will be the project to complete this week. 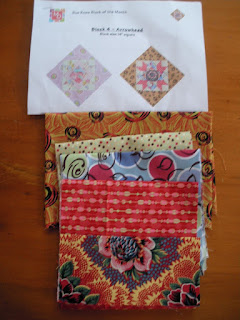 Thought I would also show you what we had for dinner last night.
The easiest pizza ever. 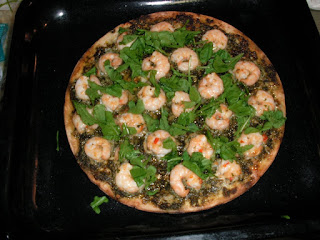 Spread a pizza base with pesto (homemade tastes better than the jar variety), top with sweet chilli prawns (or whatever flavour you choose). Bake and then top with rocket and eat-it is divine.


Hope you are all having fun with stitching. Have a good week.

Where did the last week go? I have been on Night Duty so it’s hard to even keep track of what day it is. I have just been to the Post Office to post my Advent Swap off to Germany-watch out for the postie Sigrid.

I must’ve been half asleep when I decided to sign up to participate in making Josephs Coat that Kellie is hosting  at Don’t Look Now. As if I haven’t got enough projects in the sewing room but this quilt looks brilliant so I couldn’t resist. 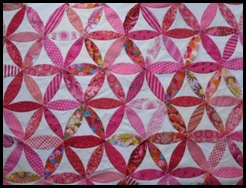 I am intending to use what is in the stash so we will see how we go. Janet over at Quiltsalott has chosen her fabrics and they look great. I had also thought a blue theme may deplete the stash a little!!

I have managed a little stitching this past week some of which I can show. 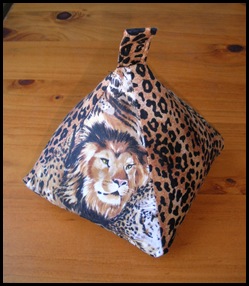 This is a doorstop I made using the pattern by Vicki over at  Among the Gum Trees . This was so easy to make and as I have an African theme in my lounge I decided to go for that look and it is sitting proudly at my front door.. These are so easy to make and I will be making more for sure.. I sprinkled aromatherapy oil onto the filling so I have a lovely scent wafting through the house. 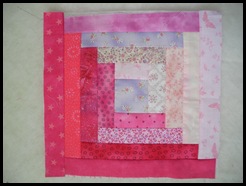 This pink log cabin block is the start of what will be a pink version of A Patch of Blue by June Gilchrist and Therese Hylton, that was first published in 2001. It appeared again in Cover Quilts No 1 published by Australian Patchwork and Quilting last year. This is going to be for my nieces daughter. I made her older sister a purple one a few years ago and have had the pink fabrics for some time and now the call has come out-when am I getting my pink one? I love that children say it as it is.  Can I get it done by January when I take a trip back to NZ? The challenge is on! 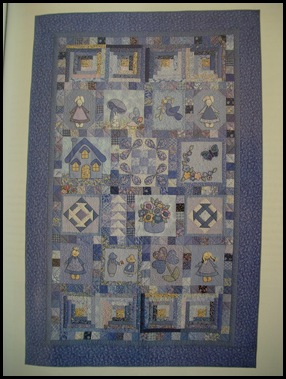 Check out this giveaway that Kelly is having over at I have a Notion .A wonderful autographed book on Thread Work.

It has been a busy week but not in the sewing room. Work has been very busy and I also had a midwifery conference to attend for two days which was very inspirational and rejuvenating. I also had an interview for a new job but they have been slow to respond through the whole process so don’t expect to hear too soon.

This morning it was up early and my nephew and I were off to the local Farmers Market which is on the first Sunday of the month. It was very busy but great atmosphere-they close off a street in a shopping area and the stalls are all set up down both sides of the road. As well as doing lots of tasting we stocked up on marinated olives and  feta cheese; herbs to plant in the garden, fruit and vegetables, natural honey and I got my scissors sharpened.

I have managed to make a Christmas sack using a pattern by Natalie Ross. I altered it in that I machine embroidered my Christmas tree using a design by Julie Hall. It pays to read instructions carefully as one of the cutting measurements was nearly two inches short,but luckily I realised that before I cut the material.  I love the finished product but it is smaller than I had thought it would be so I am making a bigger one now. 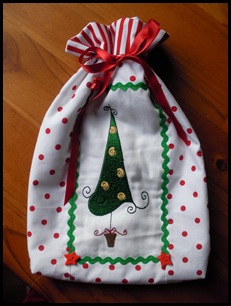 Sue Ross BOM block 4 will not be far away so can’t wait to see what challenges that will bring. Have a good week everyone.