I am so happy with the way my wall hanging has turned out and it is now on my sewing room wall. That's a much better place than having the stitcheries 'hanging out' in a plastic bag. 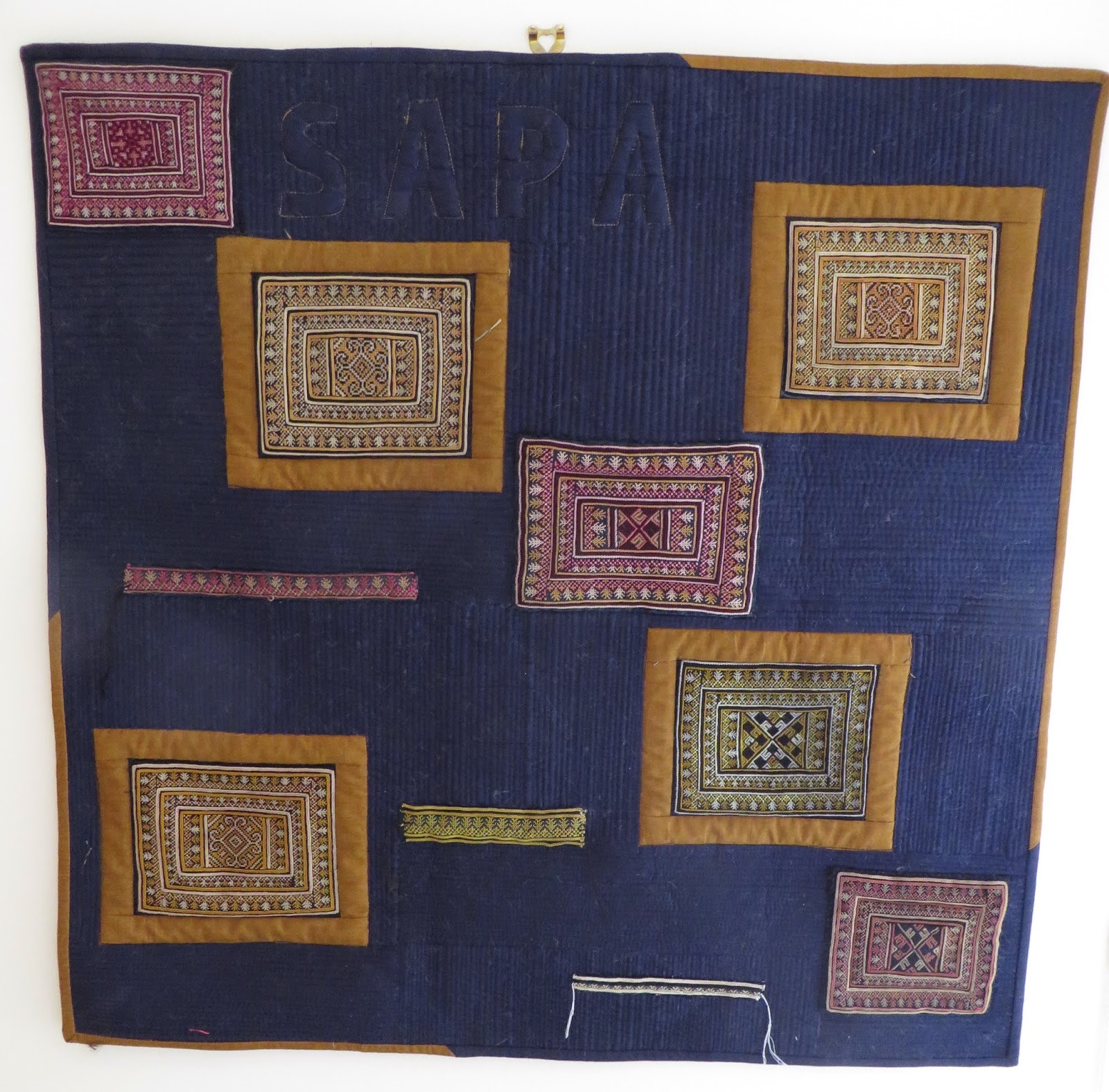 These stitcheries are not mass produced so are 'quite rustic looking'. Please click on the photo to get a better look at them.When I loaded this top on the longarm I really didn't know how I was going to quilt it but then after reading so many posts about Quiltcon I decided to do straight lines, and once I started decided to mix up both horizontal and vertical lines. Initially I was using my ruler and trying to make the lines so straight but then decided that these stitcheries do not have a perfect look so decided to do the lines totally freehand. I wrote the name SAPA across the top, which is the place we were staying when I bought these stitcheries.
The bits of cotton hanging down are what those thin strips were tied around my wrist with, so I decided to leave them in. I did have problems with beading as I used a white batting and knew I should've used black, but I didn't have any at the time and thought it would be ok. You only notice it when up close so I'm not going to stress about it.
Some photos that shoe the stitcheries and quilting better- 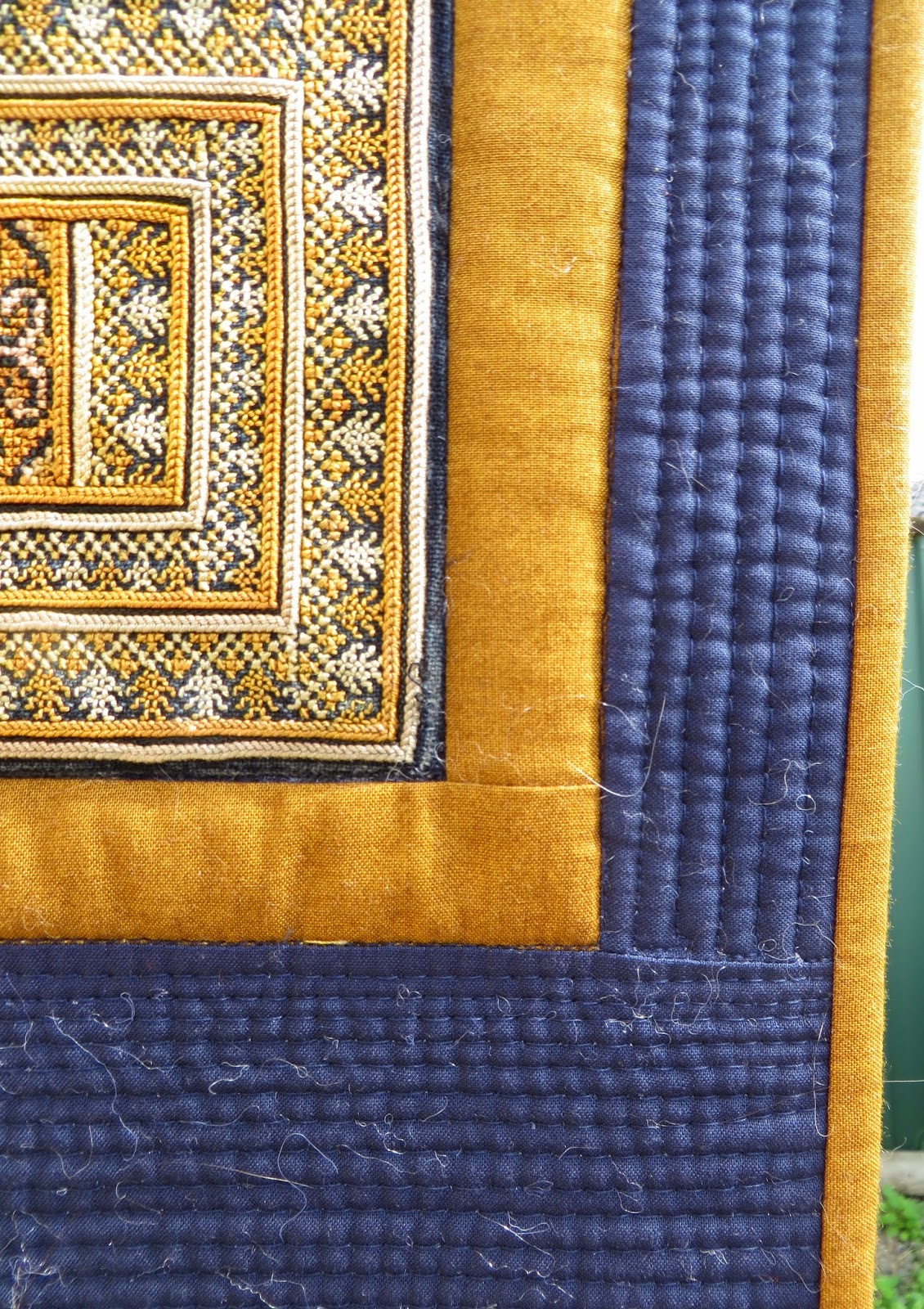 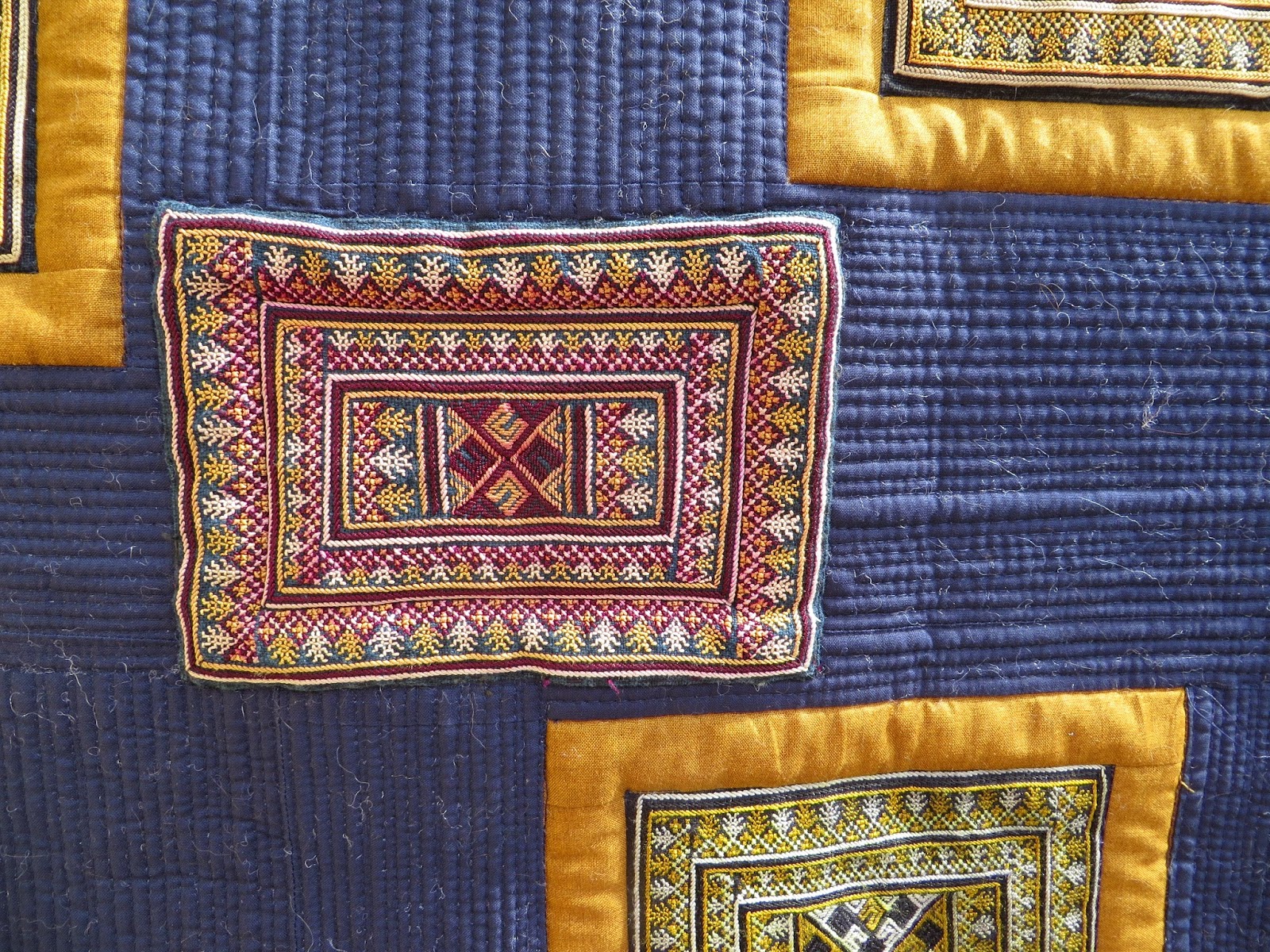 A wonderful tribute to the Hmong women and their handwork.
Posted by Marlene at 15:32 6 comments:

Well I kept finding more stitcheries so decided to combine them all into one piece. 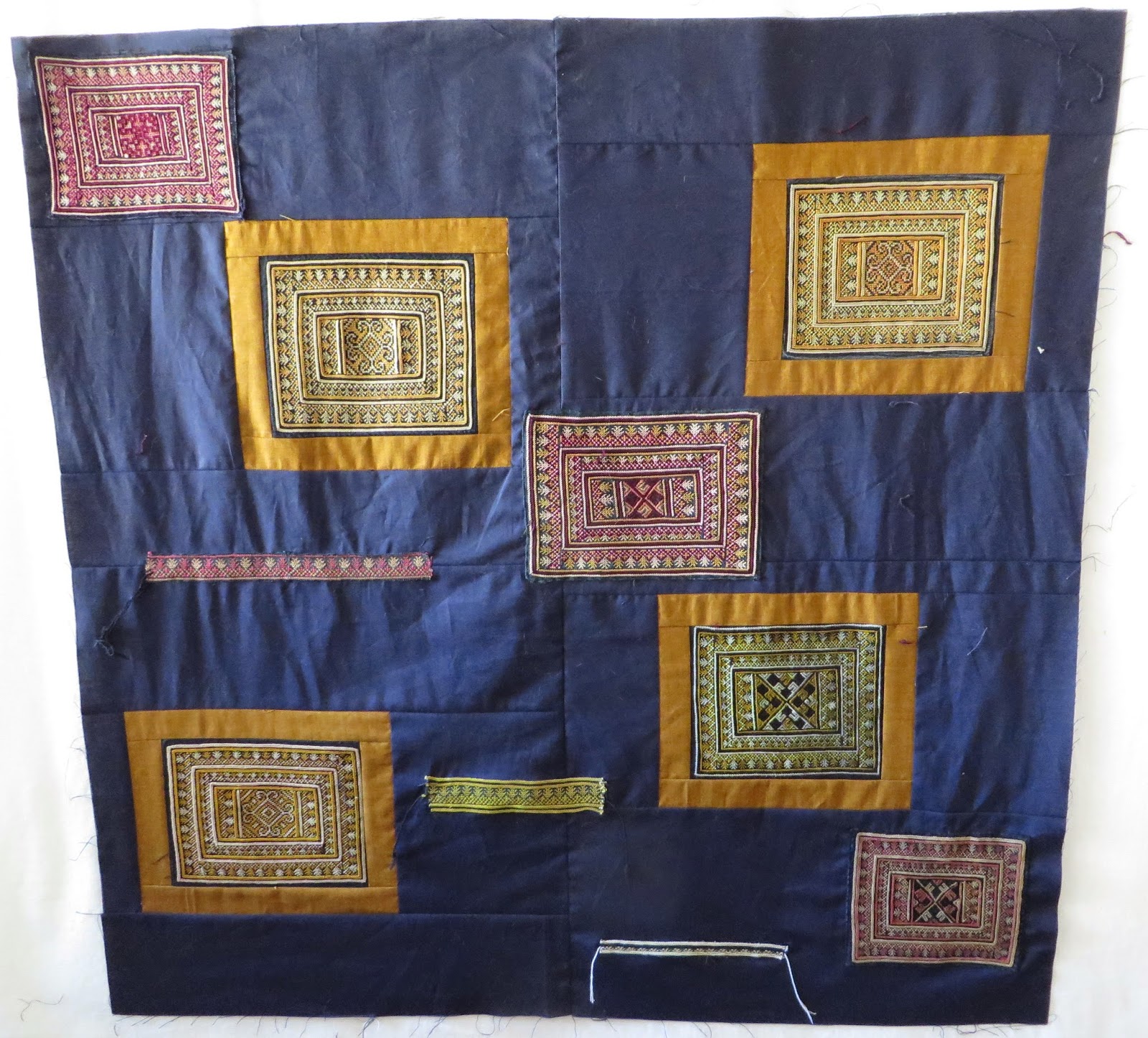 The thin strips are wristbands that a women tied around your wrist and that was a signal to all the other women that you had been 'claimed' and they were not allowed to hassle you.
Again this photo has not loaded well but it is a good record for me as to how it looked before it's quilted. this is now on the longarm and I think I will keep the quilting simple as I want the stitcheries to be the focus.
Posted by Marlene at 08:17 2 comments:

A few years ago my sister and brother in law lived in Vietnam for six months while he taught English. I went over for a holiday at the end of the contract and after a few days in Hanoi we went on the overnight train up to the mountain town of Sapa. As my sister was recovering from surgery on her leg and my brother in law from a severe bout of food poisoning, I wandered around town a lot on my own and spent most afternoons with the Hmong village women. These women would walk up to twelve kms a day to come to town to sell their needlework to the tourists. It was amazing to sit with them and watch them stitching-each design is one families traditional work. My sister used to say 'Are you off to see your friends?' and that is what it felt like.
Like a good tourist I managed to part with my money and purchase some of their items which have sat in a bag for a long time now so I thought it was time to do something with them.
These stitcheries are about to become a wallhanging-if you click on the photos you will see them clearly. Don't know why they look like they do here!! 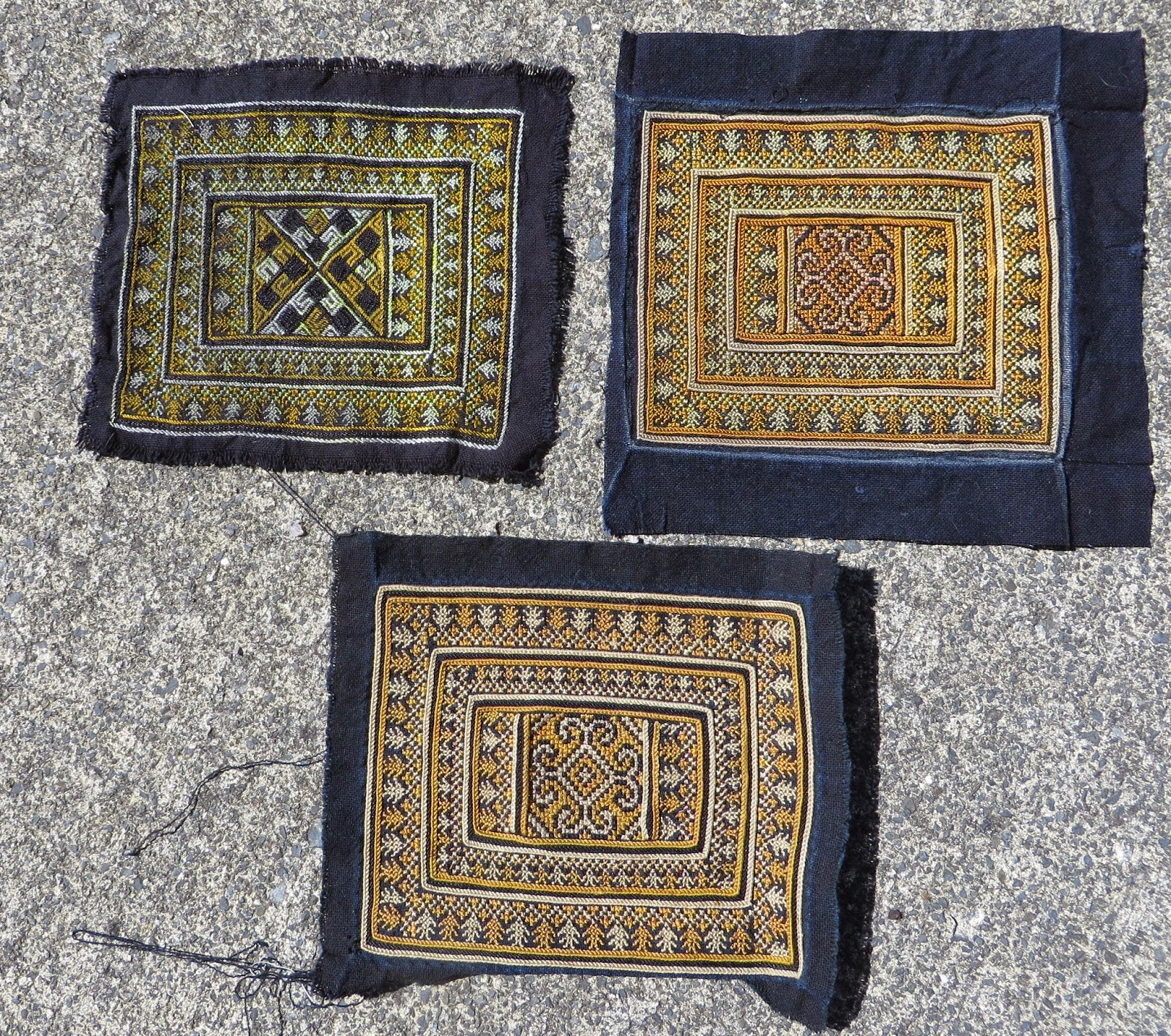 They are stitched on hand dyed indigo fabric and are very intricately stitched. They would not stand up to a lot of washing so hence a wall hanging. I bought fabrics that I thought would suit- 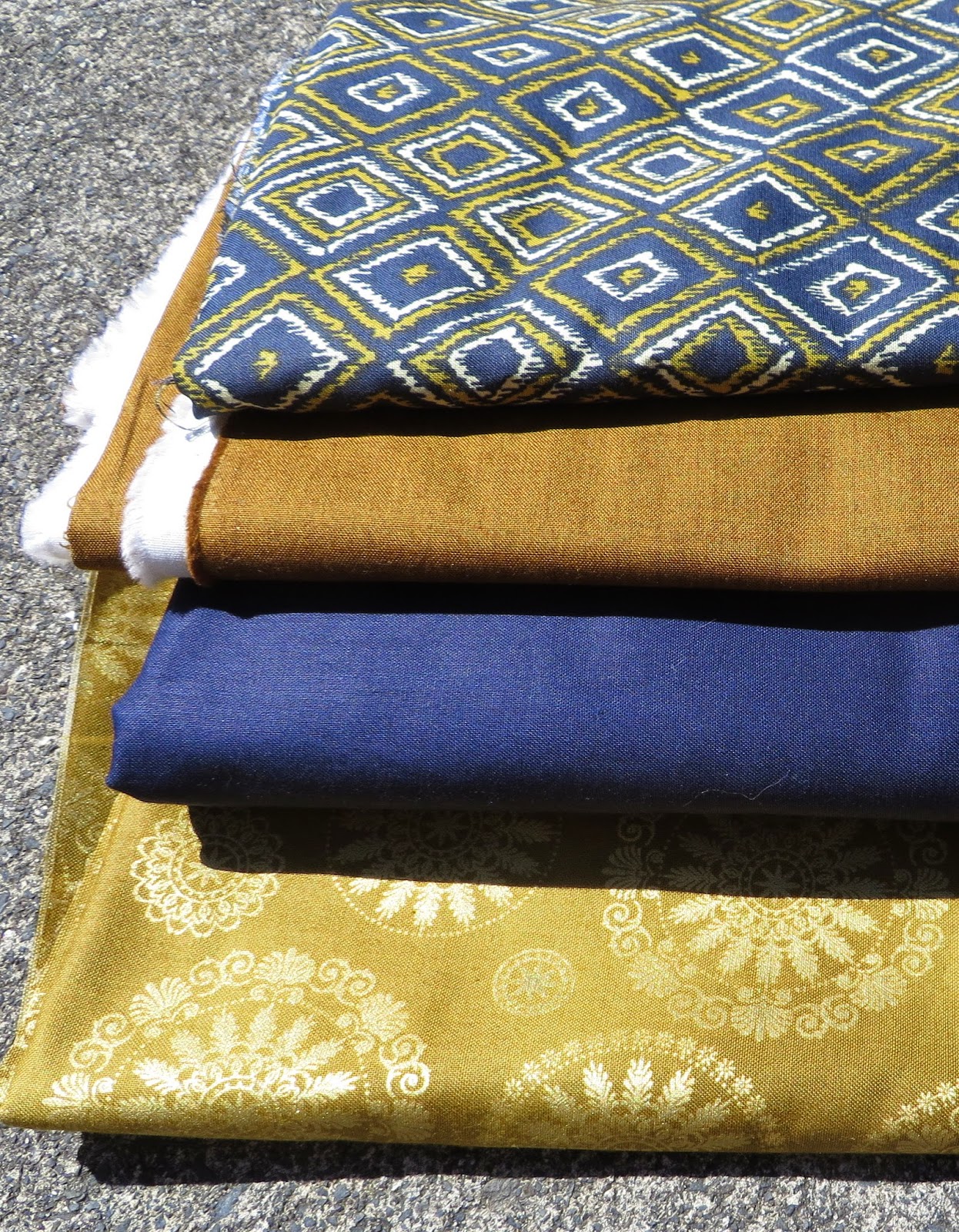 and with this design-by Mary Metcalf and featured in the New Zealand Quilter magazine. 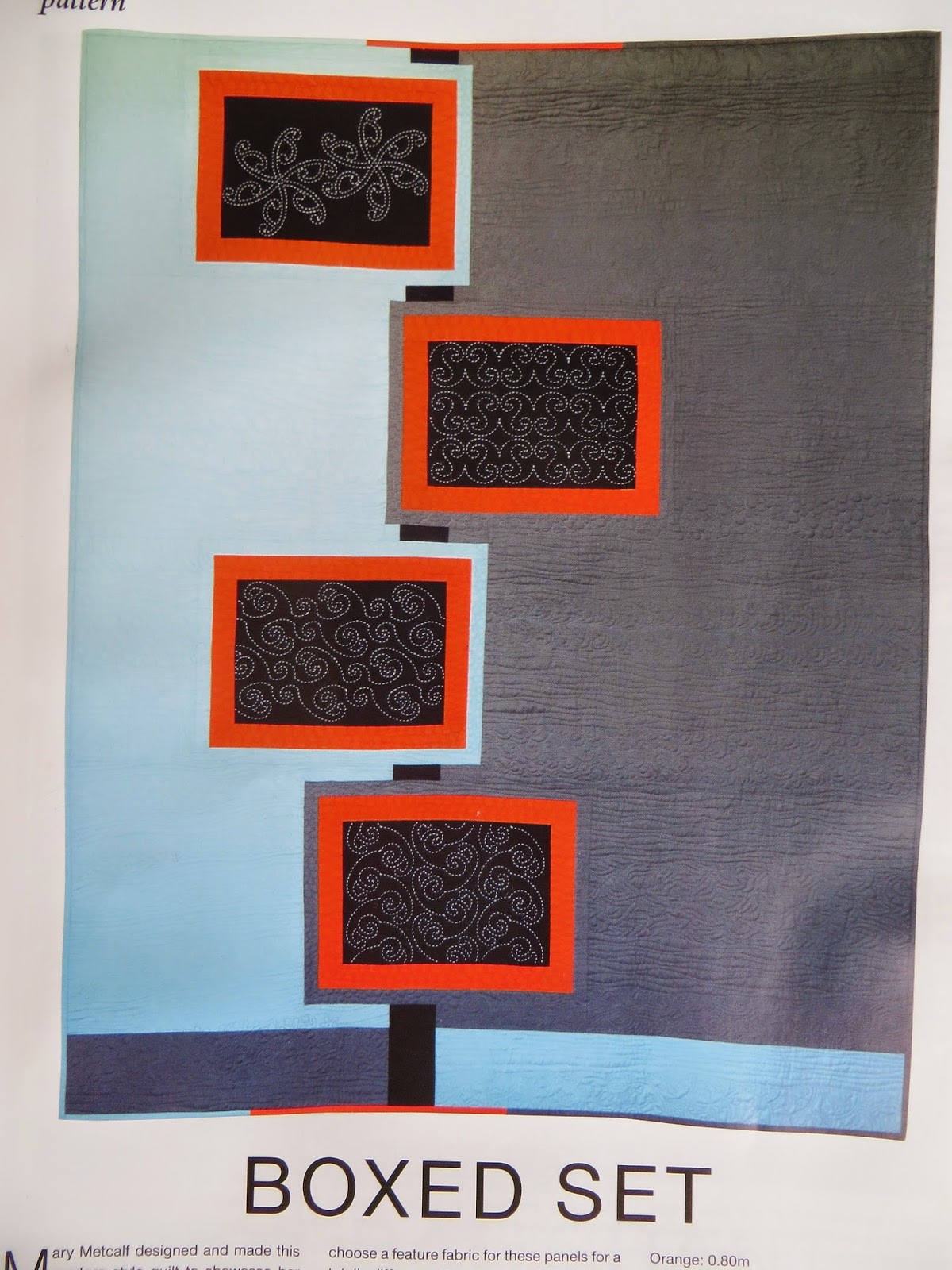 BUT NO-it didn't grab me once I started.
So now I have bordered all the stitcheries-with a Moda Cotton called Weave which is an exact match to the colour of the stitching Don't know why the solid has that pattern all over it in Blogger-in the camera it is solid!! 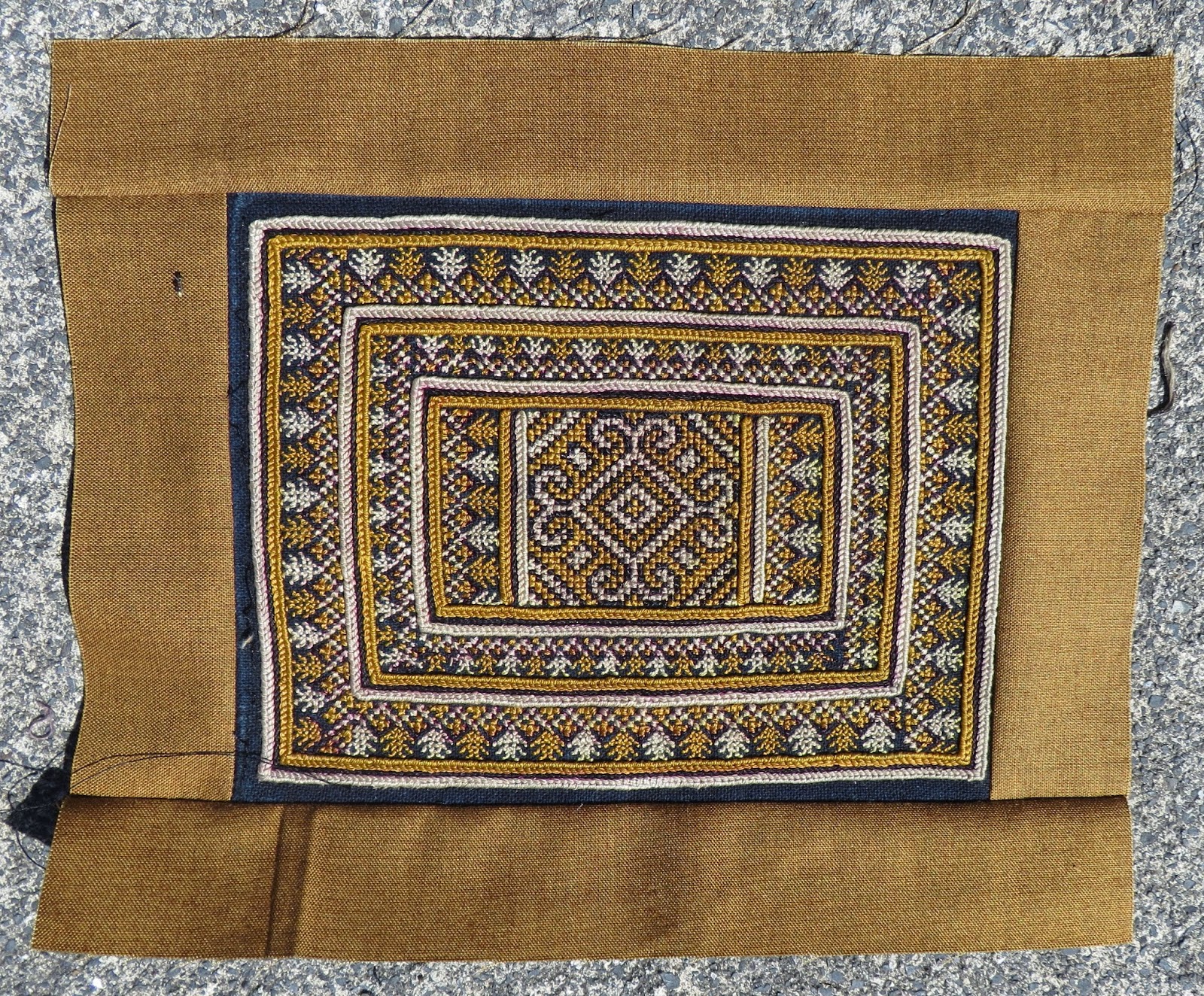 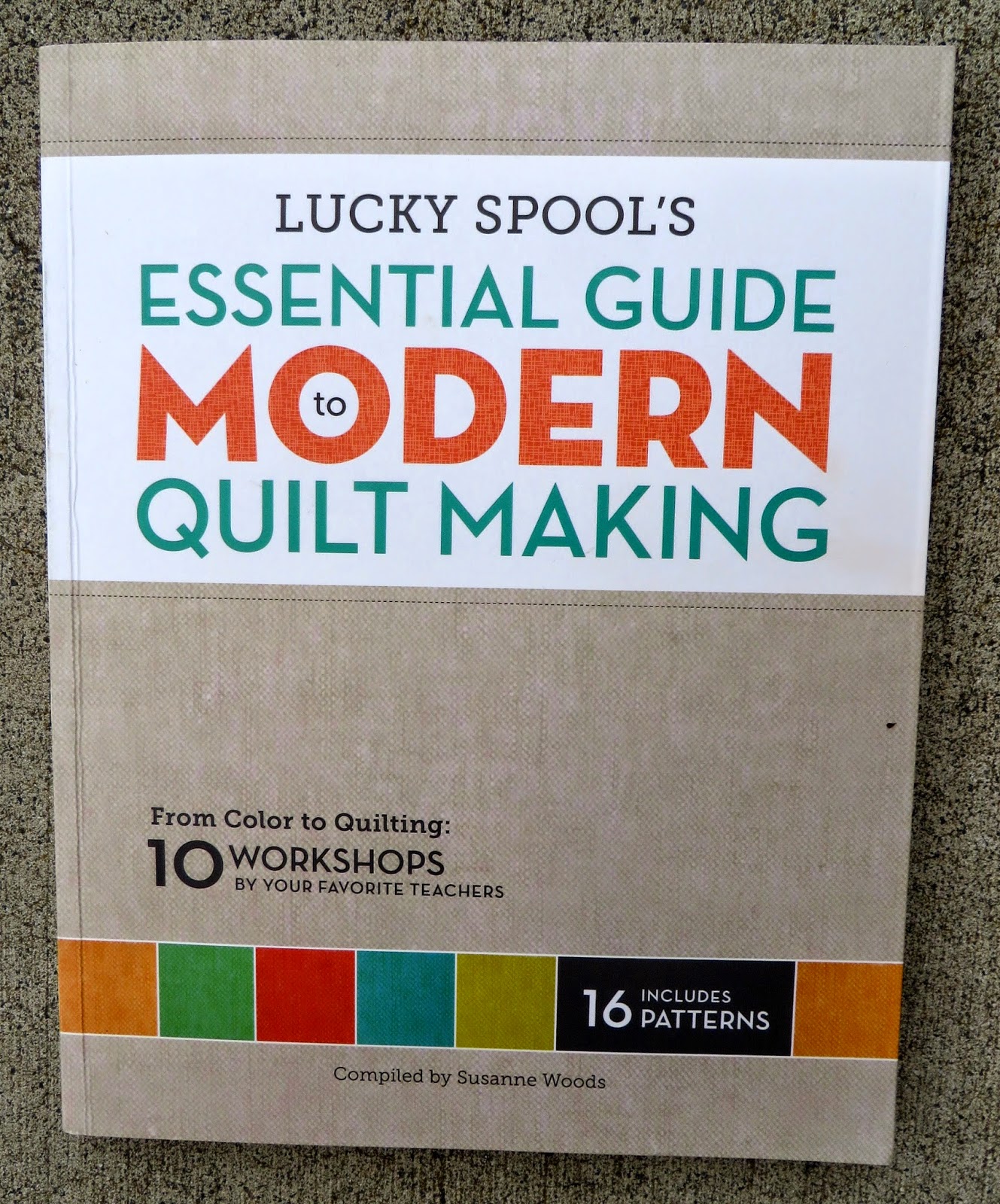 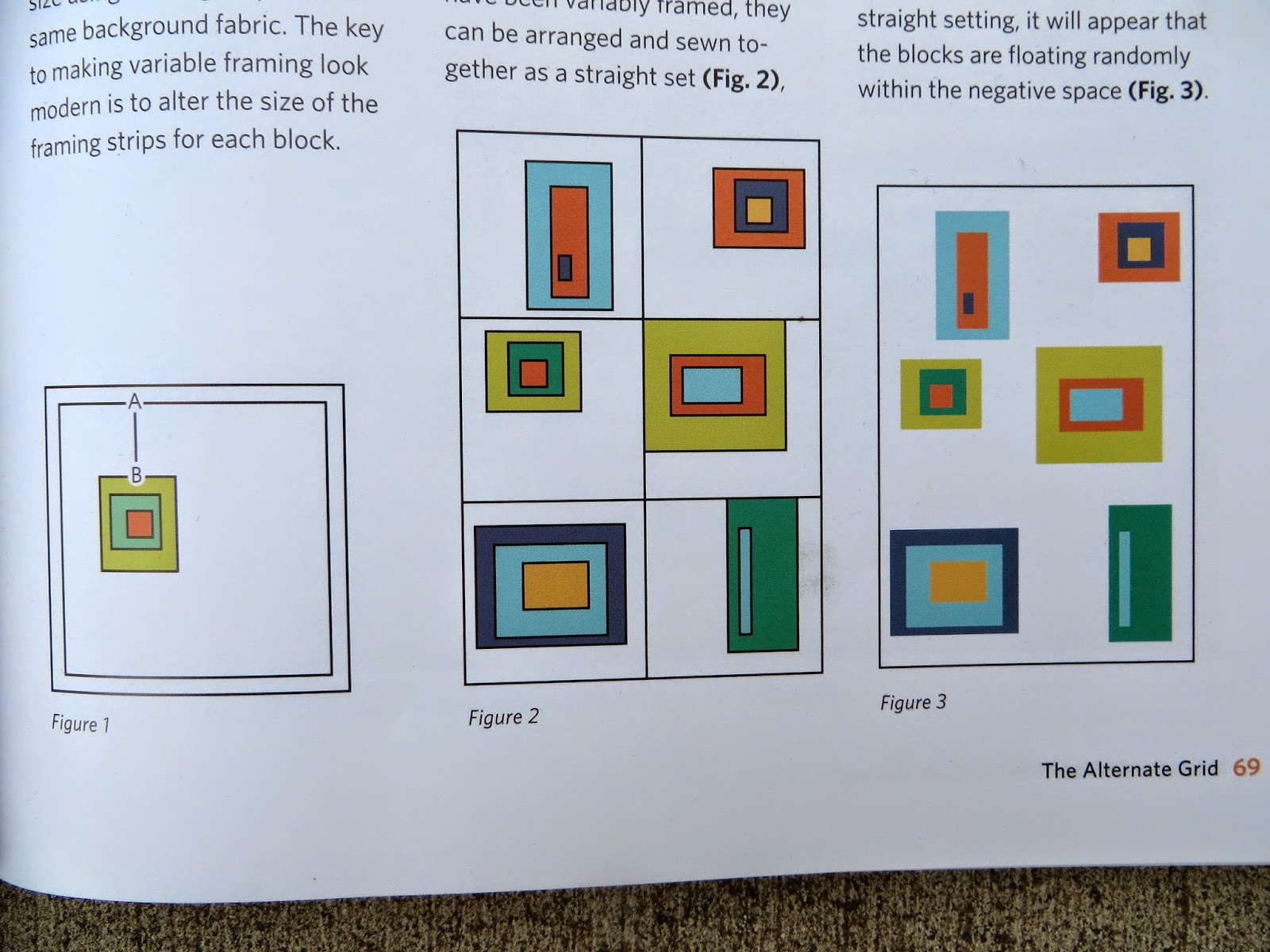 I am just having one frame around the stitcheries and using navy blue for the negative space.
One block is done and liking it so far- 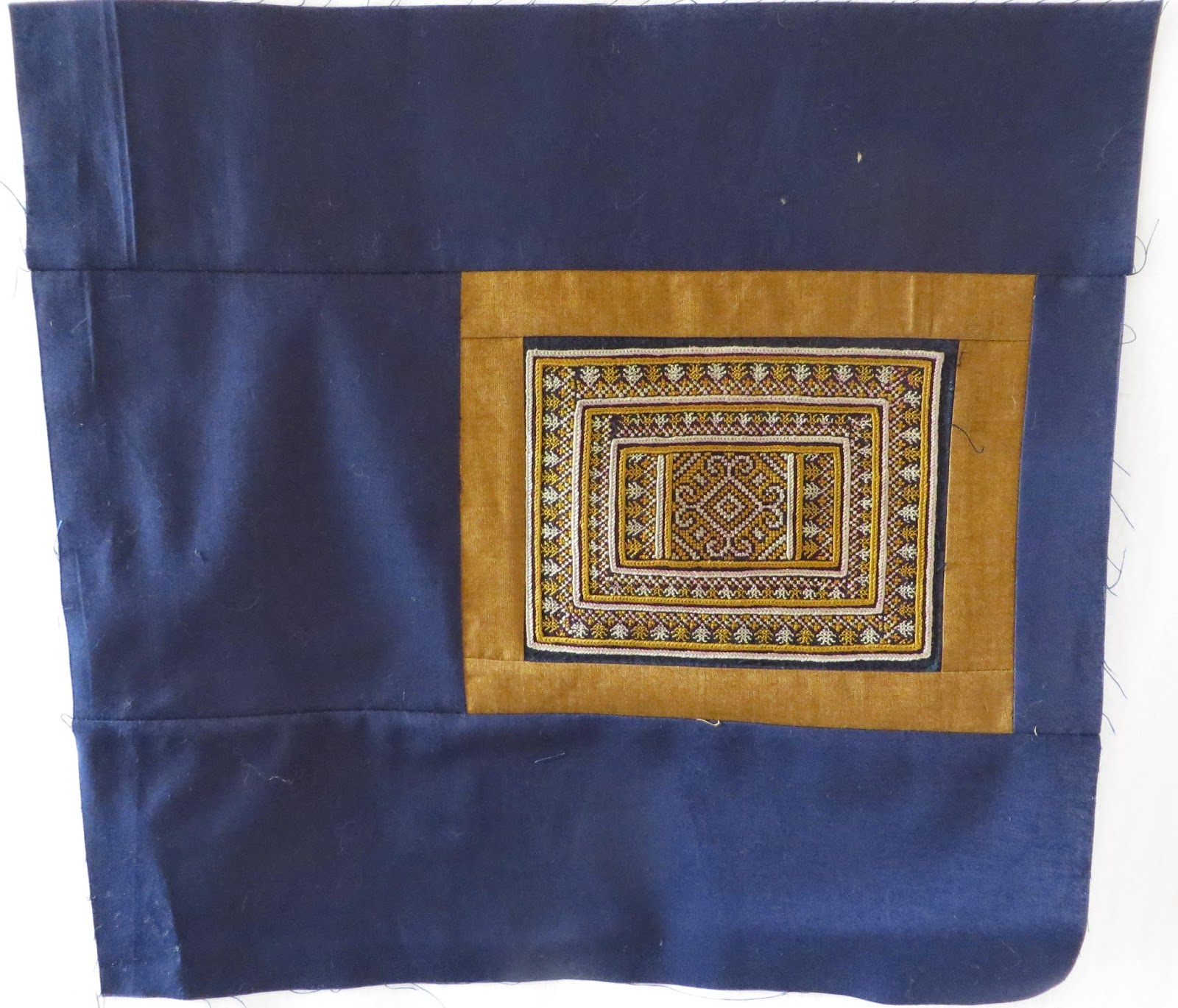