To those few who entered my giveaway I am sorry I am late in doing the draw. I unexpectedly spent the whole weekend on the golf course-and with the sun shining I have to admit it was great to be outside getting exercise and with good company.
I have to admit that I have not been in the sewing room for over a week so better change that this week or that stash will never reduce!
With the help of my neighbour we have drawn out two names of the winners and they are
Maria from  Life on the Block
Cardygirl from Cardygirl

I have sent you both an email for your address so will post the books soon. Hope you enjoy them.
Posted by Marlene at 14:40 4 comments:

Well I have been away for quite awhile-the longer you are away from blogging the harder it is to start again. I read my list of blogs daily and comment when I think appropriate and although I haven't blogged there are still people who are visiting my blog every day-amazing.
It is hard to believe that January has already been and gone-my intention was of course to recommence blogging at the beginning of the year-ha,ha!!
It has been said 'whatever you do on New Year's Day is what you will do for the rest of the year'.

If that is the case then my year will on the golf course (already coming true!!) and of course quilting-although I don't want to repeat having a needle stab me in the finger-lesson to self, 'disengage machine before fiddling with bobbin'!!. 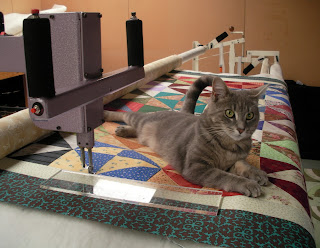 After owning my longarm for over a year it was finally time to quilt. I had tried and tried to start but could never get the tension right, then I found the Gennie Bobbin Washers and hey presto even tension.
It was however rather difficult to accomplish the task when I had a little helper. Every time I go to the machine Maisy thinks she needs to come as well, however she thinks she should be 'on the quilt'!! This was just a scrap quilt I had made and will keep it as 'my first longarm quilted quilt'. I just stitched in the ditch on every seam-and ran off track most of the time- then read that this is the hardest quilting to start with!1 Should have read that before starting but was pleased to have one under my belt. And where is the quilted now-claimed by Fat Cat-aka Bella 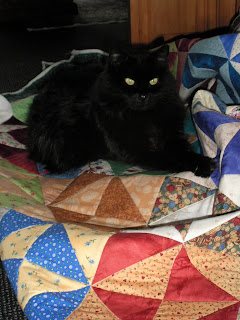 I was very excited to win a giveaway on Kathy's blog -Tamarack Shack. Kathy is a longarm quilter who lives in Canada and does the most amazing work, it is definitely worth visiting to see what she does. Kathy also snow dyes her fabric and I was lucky enough to win some along with a Canadian Quilting Magazine that featured an article about this.It is so interesting to read quilt magazines from other countries and view the quilting styles and colour themes they have. 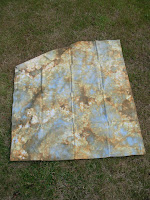 Sorry Picassa is playing fun with the photos and won't let me crop them. this is the fabric that found it's way to my house-isn't it wonderful. Looking down on it to take the photo it reminds me of a map of the world-don't want to cut it up so think I will incorporate it into a backing.
So what other quilting have I been doing-little things really. A few baby quilts that I forgot to photograph before gifting but I can say they were well received. Christmas placemats for the children next door and a few random blocks to try techniques.
I have joined in the Swoon craze but have only made one block so far but loving it. It is a 24 inch block and the original pattern has nine blocks so makes a big quilt. 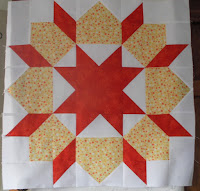 Two fat quarters and white Kona from my stash-may add borders and just make this into a little quilt or maybe a cushion cover.
Have also started the Free Motion Quilting Challenge over at Sew Cal Gal. It is free to follow and there is one guest tutorial each month-the first was Frances Moore and she showed how to do Vines and Leaves which I had an attempted at-not perfect but at least it's not just stippling- 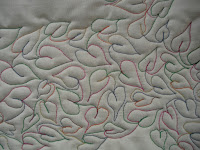 This month Diane Gaudynski has posted a tutorial on "Echo Feather Plumes' which I have not yet attempted but will definitely do so.

If you have got this far in your reading, well done! over the Christmas period I somehow ended up receiving an extra two copies of this book-it has some great ideas for using colourful scraps. 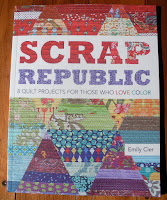 So I am going to have a giveaway. If you would like to receive a copy of this book just leave a comment. You do not have to become a follower, please do not post about this on you blog-I would rather send a copy to someone who visits because they want to see what is happening not just for the giveaway. I will draw two names out on Saturday 11th Feb.
Thanks for stopping by.