Just received an email saying Free Shipping for the next 3 days from Hancock's of Paducah.
I'm going shopping-oops got to go to work now but after work shopping it is!
You need to enter FALLSUB in the promotional code box.
Posted by Marlene at 03:53 No comments:

OMG I can't believe it is two months since I last posted, and two months since we had our huge snowfall. I have been loitering and viewing blogs but just haven't written myself.
It seems alot longer since we had that snow and have since had some glorious spring/summer days. However today it is like winter again and I have to admit I have a fire lit. The temperature has been half what it was yesterday so a bit of a shock to the system.
So what have I been up to-well not much on the sewing front really, and some of it is secret as it is at this time of the year. Work has kept me very busy and I have been working some long hours and also having to cover afternoon shifts-bit of a shock to the system and not really what my job is supposed to entail. Still I can't complain when it involves assisting a new life into the world- what a privileged job I have.
The other thing that has kept me very busy is my garden-it is a long time since I have lived in a house that has such a big garden. The flower gardens are more or less self managing except for having to spray all the roses. However the vegetable garden and tunnel house (a form of glasshouse) has taken the time getting it all planted but yesterday I finally finished planting and can't wait to eat the produce.
I have been stitching Xmas projects over the last couple of weeks and having such fun using up scraps of batting and strips of fabric to produce various forms of these-

This is making it's way to my mother, a crafter but not a quilter who loves anything I make. I should have ironed it before the photo, sorry folks. These are so easy to make as quilt as you go projects and satisfy the fix of a quick project. 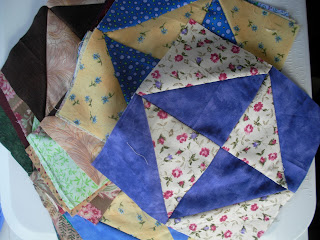 I have also been using scraps to make alot of these blocks, which will become a quilt that I can practice my skills with my longarm machine. So far i have just been doing practice pieces as I don't want to 'ruin anything'-I know I will just have to bite the bullet and make a start soon. 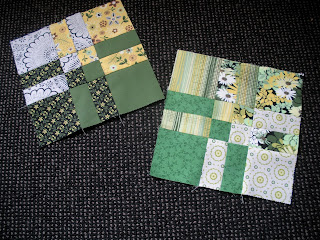 I have joined an online quilting bee organised by Lizzie, with twelve quilters from around the globe. We each have a month where we choose a block and send fabric out to the others who make a block and return it.
This is the block I made for Vivian who lives in Texas and although it was posted two weeks ago it still hasn't arrived so I hope it gets there soon. It is a Disappearing 4 Patch and was so much fun to make. 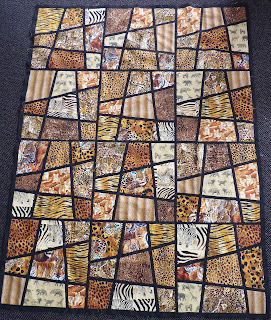 A while ago Dzintra showed some Shattered Nine Patch quilts on her blog which gave me an idea for the borders of this quilt. I made this a number of years ago now and love it but could never decide on the borders. I now need to start cutting fabrics. 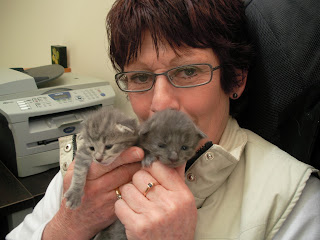 To end this post here is a photo of Barbara and Shirley. Barbara the little stripey one is coming to live at my house after Christmas. The family who owns the mother cat, Margaret, named them and I am told I can't change her name!!
Be back soon.