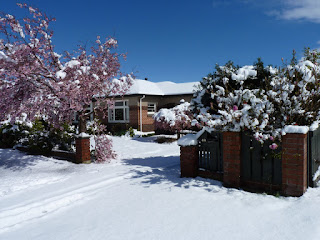 This photo was taken this afternoon and it is now snowing again. It is like Winter Wonderland however it doesn't snow like this in Invercargill-or at least not until today.
Bad weather had been predicted for the whole of New Zealand but we did not expect this. I just love it. All I need now is for Santa Claus to appear. Yes, I know it's not Christmas but it makes me feel like the Christmases I had when I was living in England. Fire is blazing -bit early for the red wine yet-that's later!!
It is just the weather for being in the sewing room but there has been other things to do- I have had a man visiting Invercargil to set this up for me- 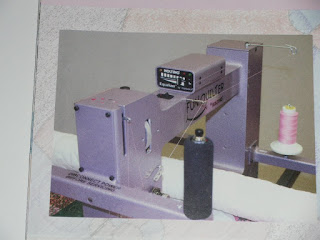 My new toy - a Nolting Funquilter. I was lucky enough to get a second hand one and purple as well so I am so lucky. Have to give her a name I think!Now I have to get to and practice,practice,practice. It has always been a dream to own a longarm quilting machine so this is the start.
The poor guy who came down to set it up and do some basic instruction (part of the deal) is now stuck in Invercargill due to the weather but should get out tomorrow.
So have I been doing any sewing-well not much but I have been sewing these- 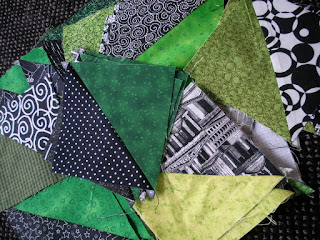 HST in green and black that are being sewn in a zigzag pattern. Will post the photo once finished.
Then I decided it was time to attack the stash and so more HST- 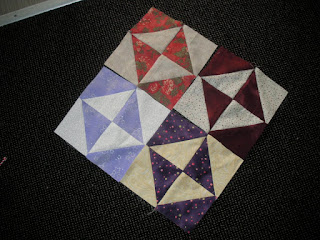 Although these were the start of a scrap quilt they will be winging their way to Lizzie in Australia who has a friend who is unwell. If you have not already done so please visit her blog to ready the sad story of a fellow quilter.
Well after another flurry of snow the sun is out so the melting will begin.
Hope you are all having a good day.
Posted by Marlene at 13:56 9 comments: 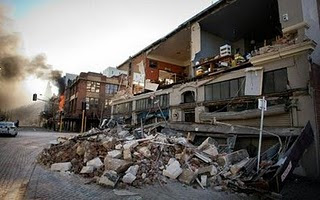 Sending thoughts and best wishes to all those affected by New Zealands earthquake.
This is one of the photos on the net of some of the devastation caused by the 7.1 earthquake in Christchurch, New Zealand, yesterday morning. It happened at 4.30am so luckily the injuries were not as serious as if it had happened in daylight hours. However the area has been declared a disaster zone and some are comparing it to the Haiti earthquake. New Zealand does have earthquakes but Christchurch was not expecting it-they are saying it was caused on a hidden fault line. Wellington is the place in New Zealand that is expected to get 'the big one'.
It is hard to imagine what the city looks like and it is only 8 hours drive north of here.
I am so glad that all those I know in they city, both bloggers and non blogging friends are all safe although have experienced a very scary event. One friends grand daughter who is staying from up in the North Island said "grannys house dances"!! You have to love them.
There was another disaster in the South Island yesterday when a small plane with sky divers aboard crashed soon after takeoff killing all nine aboard-five New Zealanders and four young people from overseas. My heart goes out to all those families affected by this tragedy.
Posted by Marlene at 14:49 3 comments:
Newer Posts Older Posts Home
Subscribe to: Posts (Atom)