Finished and so onto the quilting. Owl fabric all used up now. 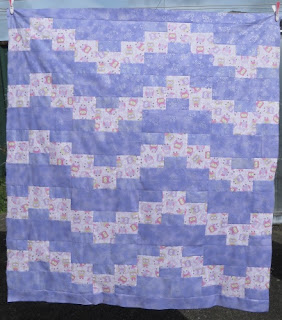 This Giant Star quilt has languished for I don't know how long waiting for the binding to be hand sewn. I made it to try the pattern but also just to use up some boy fabrics.
Well this week I got the needed push to finish it and it has now been gifted along with the chevron quilt.
A  family, with a 3 year old and 6 month old, in our small town tragically lost their house and all it's contents in a fire last week. One of their friends coordinated collecting clothes and bedding for the children. So what does a quilter do but donate quilts.

When I was young we also had the tragedy of having our house burn to the ground and the support of the community was amazing so of course I didn't hesitate to give. It was very emotional when I handed the quilts over as the woman who was collecting the goods burst into tears when I told her I had made them. She found it hard to believe someone would do this for a stranger but isn't that what we as quilters do when we can? 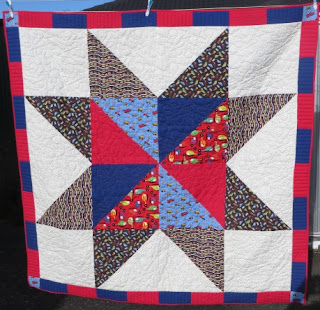 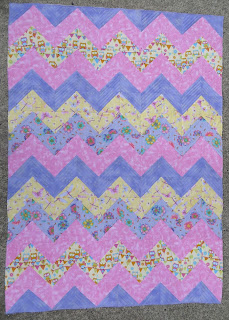 I quilted the star quilt with a meander and star pattern 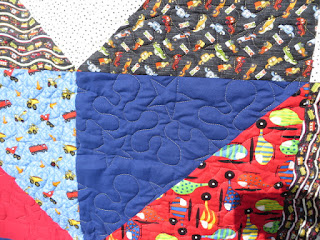 I have been busy quilting two children's applique quilts for a client but I can't show you the front of them as I don't have permission, and they have not been collected as yet. But how about a little sneak peek- 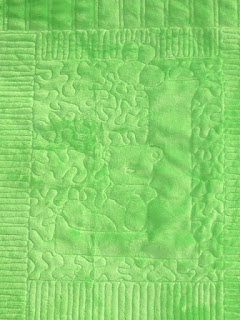 Green minkee on the back that did not cause any issues at all. I have had three applique quilts to do for this client so thinking up different designs for each one has been a challenge but almost there-just the borders on the last one to go. 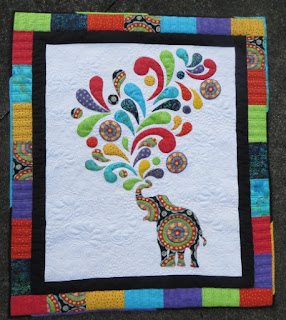 I also handed over the elephant quilt that also prompted tears from the grandma I made it for. I handed it over at work and got some  amazing feedback and another order for a baby quilt.

As I was tidying up my sewing room I was folding these fabrics and thought they go well together so why not make them into a quilt. I have been using the purple star fabric for over 10 years now-boy I must have bought a lot of it or maybe it's been a second purchase. 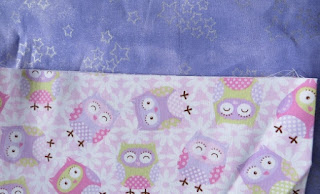 My goal for this month is to sew it into a quilt using the Wiggle Time pattern from Cynthia at www.quiltingismorefunthanhousework.blogspot.com. I will make it as big as the fabric allows. I have used this pattern before to make this Queen size quilt- 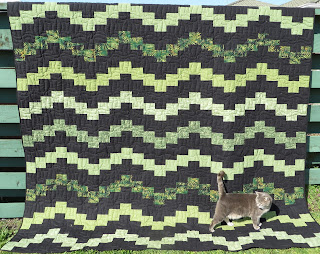 Of course Maisie had to pose for her shot as well.

Here is a shot of her yesterday- 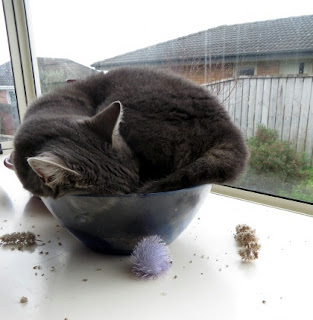 Determined to fit into her bowl od catnip and sleep the afternoon away!

After my holiday I decided I needed to reacquaint myself with Remy-my longarm before I quilted the elephant quilt. I found this top I started years ago and never finished and now can't remember what the plan was for it so decided to just quilt it up-it has finished at 35x52 inches and has a nice flannel backing so will keep a little child warm.
No matter where I tried to photograph this the true colours never showed-it is a lot more vibrant than it looks here. 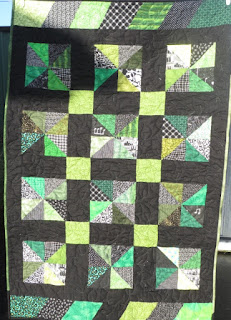 Quilted with freeform leaves and circles-liked how it turned out. 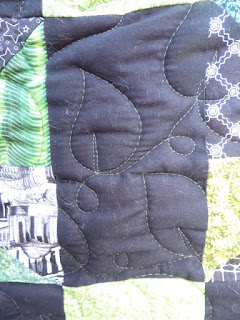 Backing of left over pieces of flannel. 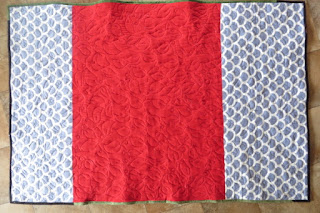 Then it was onto the elephant quilt that ended up giving me a lot of issues, but I do like the end result . I backed it with a red minkee dot-mistake number one but by the time I realized it would be an issue I had already ditch stitched and stitched around all the applique so I was not going to unpick all that.
It was at that point that a Webinair by Kim Brunner came up in my Facebook feed so I sat and watched it-well worth it. It was about loading and keeping a quilt square on your longarm and in it she said if using light fabric on the front that has a lot of negative space think carefully about a dark backing fabric as it will give a coloured tint to the front-So true but too late.
In the end the pink glow is not so much of an issue as the baby has now delivered and she is a healthy little girl (they did not know whether they were having a girl or a boy) . 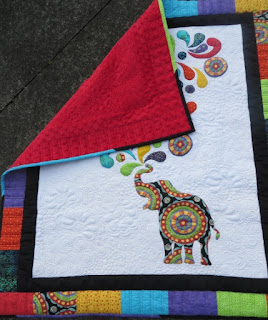 The major issue I had was with the red minkee pulling through to the top, especially when I was using red bobbin thread and it wasn't a tension issue, so very frustrating and resulted in a lot of unpicking-in fact I think I spent longer unpicking than quilting!! Next I tried a grey bobbin-(I personally like my bobbin thread to blend with the backing, not necessarily matching the top thread.) and that just ended with more unpicking. Finally I gave in and loaded a white thread and although not perfect it is passable. I have since read on MQ Resource that a quilter had the same problem with orange minkee which she solved with two layers of batting-too late for me!! I think in the future I will stick to the lighter colours as I have never had a problem with them. I do however have a client quilt to do that she supplied a bright lime green minkee so I hope that one behaves.
I wonder how many more elephant quilts I have in my future. I love both the ones I have done so far and got a call from the recipient of the yellow and grey one to say how much she loved it and they were her favourite colours (did not know that when I made it). Wonderful to hear the quilt is being used.