Thought it was long past time to write a post. So what have I been doing- well I have to admit it has not been sewing.The mailman did deliver something quilty for me though so my nose has been in this book-I do love the service the Book Depository gives. 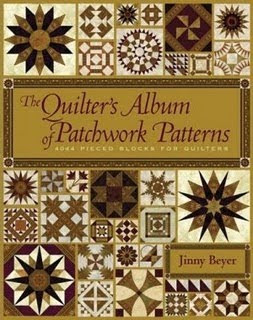 When I have not been working it has been tidying and packing. I am putting my house on the market as I am moving back to New Zealand in a couple of months. My sewing room has been packed up,although the sewing machine is still sitting there. I now need to get some handwork sorted-my Josephs Coat is very slow in progress so I need to get a few blocks prepared ready to sew.

A very good job came up for the midwifery manager of the Southland Maternity Unit and I was encouraged to apply,which I did and have been offered the job. On my trip back for mothers birthday I actually spent more time in the air than on the ground as I flew down to Invercargill for my interview,then back to the middle of the North Island to my mothers party. I am just waiting for the contract to arrive but it should all be ok and if so I will start in the middle of April. The second position I started here in Brisbane is a short term contract that finishes at the end of March and I wanted to honour that which they have been aware of the whole process.

Invercargill is right at the southern end of New Zealand and so will be fairly cold and windy but is a lovely small city which will offer a new way of life,and I am looking forward to it. There are two quiltiing shops and four golf courses so I should be fine!! It's a  part of the country that is close to skiing, lots of bush walks and coastal areas. I do have friends and a brother and sister in law who live there as well so that is good. It is all a bit of a whirlwind and what makes it worse was that I had started to paint inside my house before this all happened so the paint brush has been working overtime.
The great thing about blogging is it doesn't matter where in the world you are as long as there is access to a computer then the friends are there. So if I don't post alot over the next few weeks I will still be here but busy sorting out the transfer.
Posted by Marlene at 06:46 13 comments:

It is awhile since I have posted,or replied to any comments so please forgive me. This is the reason why- 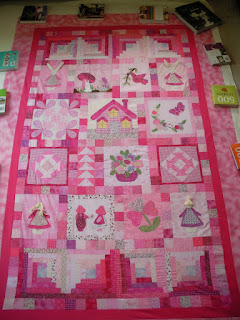 I have shown a few of the blocks for this quilt in previous posts. When I said I would make it, and take it back to NZ with me last week, I forgot just how much work this quilt took and so I was really over committed in my time frame. I worked on it every moment I could and I wouldn't like to think how many hours it took to do but it was worth it and I really loved how it turned out(almost wanted to keep it). I even stayed away from the golf course for a month as that would've taken away too many quilting hours. The border and the applique blocks are all stippled after outline quilting the applique shapes.This photo is not really the best but this is it laid on the floor ready for pinning. I haven't got a photo of it finished as I left it with my sister to finish sewing the binding down-she is the recipients grandmother so didn't mind doing the last bit for me.
But this shows just how worth it it was - 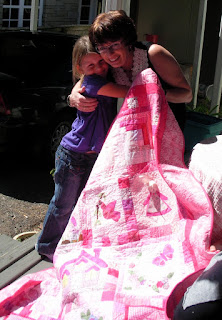 Brooklyn loved her quilt.
I have just been back to NZ for a flying visit to celebrate mothers 80th birthday so th quilt was given then.
And before you all ask -No I didn't make my mother a quilt. She has one I made her on her bed and also a lap quilt I made some time ago. My sister and I bought her a sewing machine as hers had stopped working and she loves sewing- she is not a quilter but has sewn for as long as I can remember. We had a great family reunion and everyone had a great time-have now come back to recover.
So now I think it may be time to look through the unfinished projects and finish some of them before I tackle the next big project.
Posted by Marlene at 18:02 12 comments:

To all my blogging friends out there HAPPY NEW YEAR.
I trust that 2010 brings you all what you wish for. It's exciting to think we are starting another year and what that may bring we as yet do not know.
My thoughts go out to those who are beginning the year having just lost their homes in bushfires and I trust that love and friendship is surrounding them a this time.
I want to say thank you to everyone who has helped me as I started my blog in 2009 and for the many friendships I have made in such a short time. I look forward to continuing these in 2010.
I am now off to work for the day. I worked last evening as well so there were no big celebrations going on here. Have a lovely New Years Day everyone.
Posted by Marlene at 06:05 3 comments:
Newer Posts Older Posts Home
Subscribe to: Posts (Atom)